British Ambassador to Poland HE Graeme Jonathan Knott – a guest of the EBC Poland. 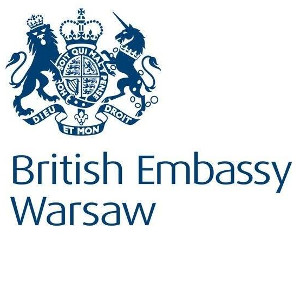 Upon the invitation of the President Janusz Cieślak on the 25th September 2017 traditionally in the Hotel Czarny Kot – My Warsaw Residence the  British Ambassador to Poland HE Graeme Jonathan Knott was the guest of the European Business Club Poland.

Greeting the British Ambassador to Poland HE Graeme Jonathan Knott the President of the European Business Club Poland Mr. Janusz Cieślak emphasized that currently the Polish-British economic relations obtain very good results which to our satisfaction increase systematically and at the same time we await with concern what the date of 29th March 2019 – moment of Great Britain’s exit from the European Union will bring to our relations.  This is today the most important question which we ask. 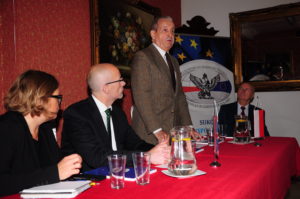 Thanking for the invitation British Ambassador to Poland HE Graeme Jonathan Knott at the beginning made a reservation that he can discuss with full responsibility and precision issues of mutual business relations of Poland and Great Britain. However, as it comes to Brexit and answers to the questions what we can expect after it, he could not say much at the moment as negotiations are undergoing and situation is very dynamic. Of course there is already a certain framework which the Prime Minister Theresa May particularly highlighted on the 22nd September of this year during a conference in Florence but as of now one cannot talk about details. It is too early for that today.

The Ambassador emphasized that over 1 million Polish people live in Great Britain who have a great input into the development of the British economy. Today in his opinion our mutual business relations are good but definitely one cannot yet say that they are very good, so such as we would want them to be. Good means that without barriers the exchange of citizens, business, scientific and technological achievements is carried out. However, in each  of the areas there are still vast reserves so that each party could in full use its potential. Here it is essential to increase the participation of the governments to make that happen. That is why in our inter-government relations lately annual working meetings have been introduced at which the rules of the development of mutual relations for the next 12 months are set. They are chaired by Prime Ministers of both countries. At the last meeting in Warsaw in November 2016, 82 most important issues to carry out during the year were formed. The next mutual initiative are the annual meetings of the representatives of business, science and Polish Community (Polonia) in England. 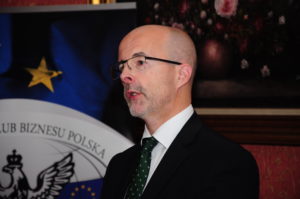 Coming into details the Ambasador highlighted that in the last decade mutual trade exchange increased twice, up to 17,5 billion pounds last year and trade from Poland to the British Isles amounted to 12,3 billion pounds. Poland is also the 7th investor in Great Britain – our investments exceeded billion Euro. British investments in Poland exceeded 9 billion Euro which puts them on the 4th place among investors in the Republic of Poland.

Proceeding into details the Ambasador indicated that in the last decade our mutual trade exchange increased twice up to 17,5 billion pounds in the last year.

At the same time Polish export to the British Isles amounted to 12.3 billion pounds.

Poland is also the 7th investor in Great Britain – our investment exceeded a billion euro. British investments in Poland exceeded 9 billion euro which places it on the 4th place among investors in the Republic of Poland.

Moving on to the topic of mutual relations after the exit of Great Britain from the European Union, the Ambasador stated it is not too far away, only 20 months. After that time the British Isles according to the vision of the Prime Minister of Great Britain Teresa May will be a country with its own independent decision making parliament, with its own legal system and government which will control inflow of people on the British borders. However, leaving the European Union Great Britain will not cut itself off from it, on the contrary it will continue to co-operate with it closely. Today negotiations are still taking place and from its effects the final shape of co-operation will come out. The Prime Minister Teresa May hopes that a mutual special trade agreement with the EU will come into place which will be beneficial for both parties. It will not only address business issues but also issues of security, co-operation of investigative authorities, co-operation in the area of science and technical aspects, cultural exchange and many other issues that are common for us.

The British Ambassador to Poland HE Graeme Jonathan Knott emphasized that the current situation in negotiations implies that all issues will be agreed before 29th March 2019. Especially that their process is calm, content-related without too much politics and the so called “tensing of muscles”.

Traditionally after the High Commissioner’s speech an interesting discussion began and also answers for the questions asked by the gathered members of the European Business Club Poland were answered.

The British Ambassador  HE Graeme Jonathan Knott assured that everything depends on the results of the negotiations but today British proposals are such as not to change anything in the functioning of those who already operate in Great Britain. It concerns both business and social issues. If people are there for over 5 years then they will receive the status of residency. If they are there for a shorter period of time then they will receive that status when that 5 years of their stay in Britain will be due. How it will be with new people and new investors will be clear after the negotiations. However, what HE Graeme Jonathan Knott has emphasized that the rule of the British Government is to support those who have an input into the development of the country. And referring to various media information he assured that there is no truth in such headlines as “We close doors to Great Britain’s markets”. The British Government wants to have a 2 year transitional period after the Brexit in order to deal with any problems that would appear. With certainty it will support European business interested in investing on the Isles, especially innovative companies. For those companies a financial support system is already set from 5 thousand up to even 10 million pounds. Until 2020 corporate income tax will be reduced from 20 to 17 percent. The Prime Minister Theresa May is of the opinion that Great Britain should continue to participate in the scientific research carried out the European Union and have its financial share. Because as he indicated it is in our European interest. 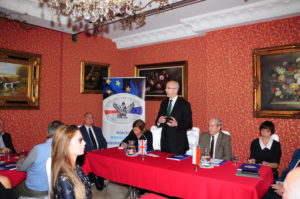 Being asked the question what the Ambasador thinks about the so called Europe of two speeds, he said that this vision is not supported by Great Britain but in two years time Great Britain will not have influence over that. However, Great Britain’s aim is to pursue for Europe to be stable, secure and affluent. Because Europe’s welfare is our welfare – he emphasized at the end of his speech.

The meeting with British Ambassador to Poland HE Graeme Jonathan Knott ended with the applause of the people gathered in the room. 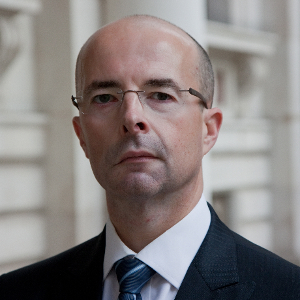 Jonathan was appointed Her Majesty´s Ambassador to Poland in April 2016. He was previously Her Majesty’s Ambassador to Hungary between February 2012 and April 2015. Jonathan joined the FCO in 1988 and has held a variety of diplomatic posts at home and abroad, several with a particular focus on commercial and corporate finance issues.

Jonathan is married and has one daughter and two sons.

The Ambassador represents Her Majesty The Queen and the UK government in the country to which they are appointed. They are responsible for the direction and work of the Embassy and its Consulates, including political work, trade and investment, press and cultural relations, and visa and consular services.