We remember and are grateful – the annual ceremony in front of a monument to Henryk Sławik and József Antall Senior in Warsaw. 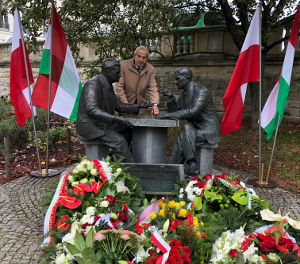 WE REMEMBER AND ARE GRATEFUL for preventing Hitler’s troops from attacking Poland from the south in September 1939.

The memorable and uplifting words of Hungarian Prime Minister Pál Teleki, who, under the pressure from Berlin, had the courage to reply to Ribbentrop that he was prepared to order bridges to be blown up if Wehrmacht troops tried to cross Hungarian territory without his permission in order to strike at a country with which Hungarians were linked by centuries of friendship and brotherhood, have gone down in history!

And as if that was not enough, on 18 September 1939, i.e. the very next day after the Soviet military attack on the Eastern part of Poland, Regent Miklós Horthy and Prime Minister Teleki take a second courageous decision to open the border of their country to more than 120,000 Polish war refugees ­– military, civilians, clergy, youth and children. They not only welcome our compatriots under the Hungarian roof, but also create conditions for their stay during the war!

“This is the reason why on the successive anniversaries of those events we meet in front of the monument to Henryk Sławik and József Antall Senior, who are the symbols of the extraordinary Polish-Hungarian brotherhood in the years of war. In order to – I repeat – tell the Hungarians through the Ambassador Orsolya Kóvacs, who is here today: We remember and are grateful!”. These were the words of Grzegorz Łubczyk, former Polish Ambassador to Hungary and vice-president of the Henryk Sławik ­– Memory and Work Association, to the invited guests.

The ceremony was attended by, among others, Ambassador Orsolyia Kóvacs and former refugees who found care and a roof over their heads, witnesses of that EXODUS.

The European Business Club Poland was represented by its President Janusz Cieślak.

In 2016, a monument to Henryk Slawik and József Antall Senior was unveiled in Dolinka Szwajcarska, which was the first of its kind in Warsaw honouring a Silesian, who participated in the three Silesian Uprisings and a prominent Hungarian, whom the refugees called the “Father of Poles”. It should be added that in 2016 the initiator of the above-mentioned monument ­­– Ambassador Grzegorz Łubczyk became the winner of the European Business Club Poland Award “SIGNUM TEMPORIS 2016 ZNAK CZASU” with the following justification: “in recognition of his merits in his activities to popularise knowledge about Polish refugees in Hungary from 1939 to 1946 and Polish-Hungarian relations during World War II.”

The annual ceremony, organised on 19 September 2022 by the Office for War Veterans and Victims of Oppression, the Society of Friends of Silesia in Warsaw and the Henryk Sławik – Memory and Work Association, is an expression of thanks for the great heart, help and care of Hungarians for more than one hundred thousand Polish war refugees in the years 1939 –1945.

This website uses cookies to improve your experience while you navigate through the website. Out of these, the cookies that are categorized as necessary are stored on your browser as they are essential for the working of basic functionalities of the website. We also use third-party cookies that help us analyze and understand how you use this website. These cookies will be stored in your browser only with your consent. You also have the option to opt-out of these cookies. But opting out of some of these cookies may affect your browsing experience.
Necessary Always Enabled
Necessary cookies are absolutely essential for the website to function properly. This category only includes cookies that ensures basic functionalities and security features of the website. These cookies do not store any personal information.
Non-necessary
Any cookies that may not be particularly necessary for the website to function and is used specifically to collect user personal data via analytics, ads, other embedded contents are termed as non-necessary cookies. It is mandatory to procure user consent prior to running these cookies on your website.
SAVE & ACCEPT