Ambassador of Slovenia in Poland 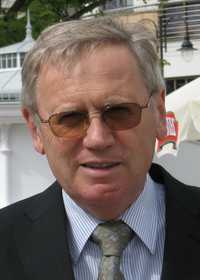 born May 15, 1949 , Šentlenart ( Brežice ) Slovenia, a former member of Parliament (1992-1997 ) and former ambassador to the United Kingdom, currently ambassador to Poland married with two children.

In 1996 and 2000 Ambassador Marjan Šetinc was a member of the Slovenian Statistical Council and a member of the London Association of Diplomats . He is also the founder and president of the Slovenian Association of Students of Education, is currently Secretary General of the Slovenian company of international relations, is also a member of the UNICEF Slovenia.
Ambassador Marjan Šetinc completed many professional training courses m.in: the University of Liège ( Belgium) , University of Durham ( England), University of Enschede (Netherlands), University of British Columbia ( Canada) , Boston College ( Boston , USA). He published more than 50 articles and publications .
In 1989 he participated in the group of experts who prepared the first report of the UNESCO World Education, in 2005 issued the first time in Slovenia report on the development of international cooperation 2002-2004. In 1989 he founded The School Field – an international journal published in London, devoted to the study of the theory of education.
He was also a leading graduate seminars include Lancaster University, Strathclyde University, LSE , Kingston University and participated in the following international projects : International Assessment of Educational Achievement , ETS Princeton, USA , International Association for the Evaluation of Educational Achievement : TIMSS , Reading Literacy , Civic Education Project .
As Ambassador in Poland, presented the Slovenian foreign policy in the Institute of International Affairs, European Diplomatic Academy in Warsaw Business Journal and the European Economic Congress , the Business Center Club, Alpine – Subcarpathian Forum .