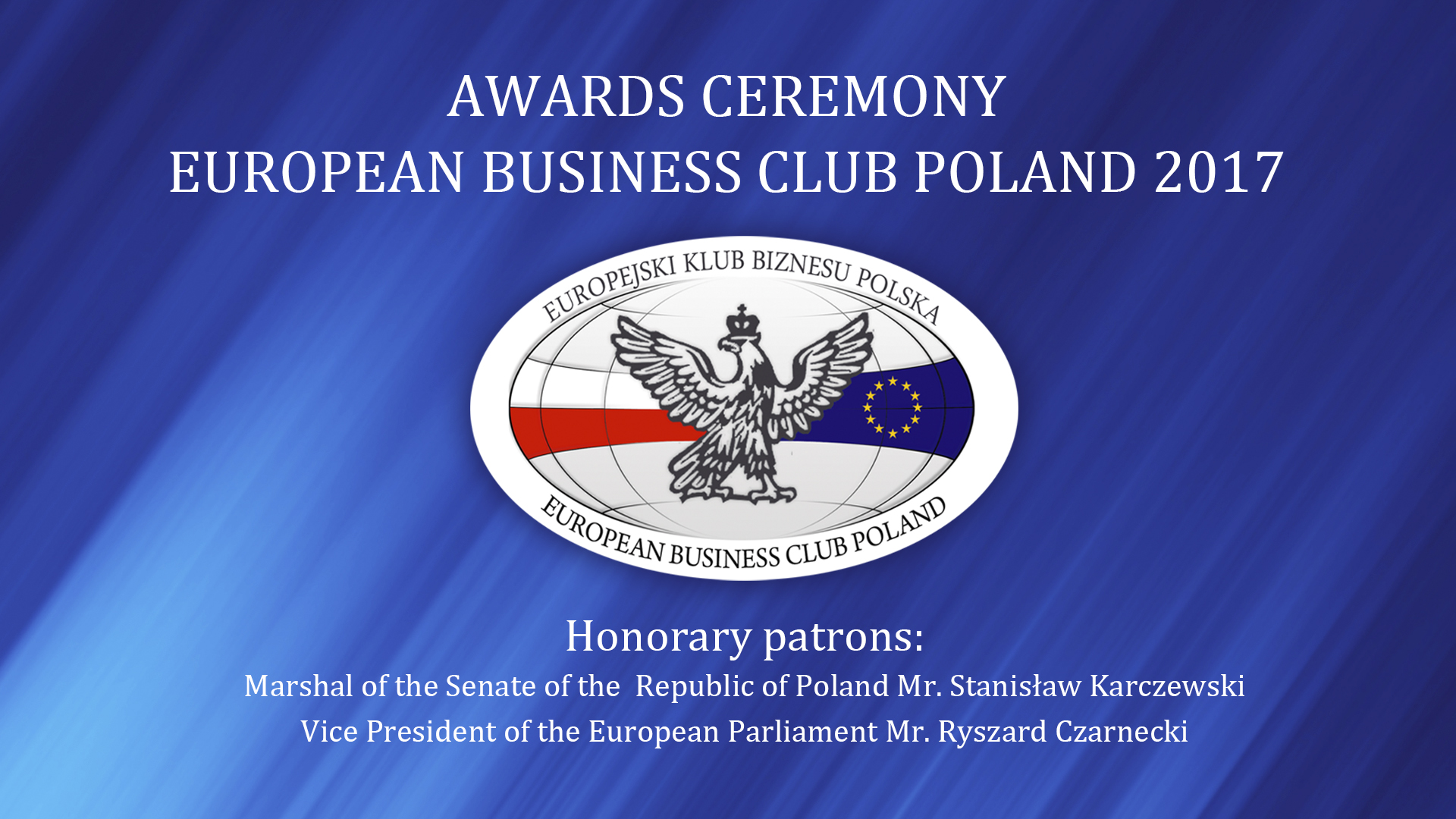 For the third time the European Business Club Poland – at the official Gala Award Ceremony – honoured individuals and companies  which in a particular way contributed to the development of entrepreneurship, economy, local governments and charity activities, science, culture and sport as well as those who achieved success on the European and global scale.

The chapter of the Awards of the European Business Club Poland, composed of outstanding representatives of business, science and sport and chaired by Professor Elżbieta Mączyńska, the President of the Polish Economic Society and member of National Development Council called by President of the Republic of Poland, awarded the honorary prizes, as follows:

Mateusz Morawiecki, the Deputy Prime Minister, Minister of Economic Development and Finance, in the recognition of his special contributions and achievements in the activities for creating conditions for the Polish economy development and increasing its importance in the international arena.

Beata Drzazga, the Presidend of BetaMed S. A., for building the biggest in Poland professional and patient-friendly medical company Beta Meta S. A. providing home and clinic medical care for the chronically-ill and aged people as well as for outstanding managerial achievements.

Senator Lidia Staroń  for taking up and solving difficult problems of Polish enterpreneurs , defending their good name and initiating changes in the Polish law.

The team of ski jumpers composed of Maciej Kot, Dawid Kubacki, Kamil Stoch and Piotr Żyła for setting world-wide standards in team ski jumping, making the name of Poland famous all over the world and building positive social emotions.

TV  POLONIA  for popularizing the Polish economy abroad and unique achievement in building the national pride among the Polish community world-wide.

The Praski Port  for the bold implementation of the architectural and urban development project “the Praski Port – a town of new generation” which will transform Warsaw into a modern capital of the XXIst century.

Whisbear®  (Firma SZUMISIE)  for creativity and the innovative project Whisbear®  (Szumisie) meant for babies as well as for boldness in winning the world-wide markets.

We have pleasure in informing that  Stanisław Karczewski, the Speaker of the Senate of the Republic of Poland, and Ryszard Czarnecki, the Deputy Chairman of the European Parliament, were the honorary patrons of the Gala Ceremony.

Deutsche Bank was the patron of the Gala and the Konarczuk Meat Factory (Zakład Mięsny Konarczuk) was its sponsor.

The European  Business Club Poland Gala Award Ceremony was held at the Olympic Centre in Warsaw on 28 October, 2017. The ceremony was conducted by journalist Przemysław Tarkowski, the winner of the BENE MERITUS AWARD 2015, Highly Distinguished. The place of the Gala itself caused that the artistic programme performers were  talented young people: 14-year- old Oliwia Szydłowska who presented a dancing programme and the Youth Orchestra of the Tadeusz Wrześniak Glassworks.

This year for the first time a live coverage for the Ceremony was run on the social portals of You Tube and Facebook. We invite all the interested persons to see the event.

We offer warm congratulations to all the Prize-winners. 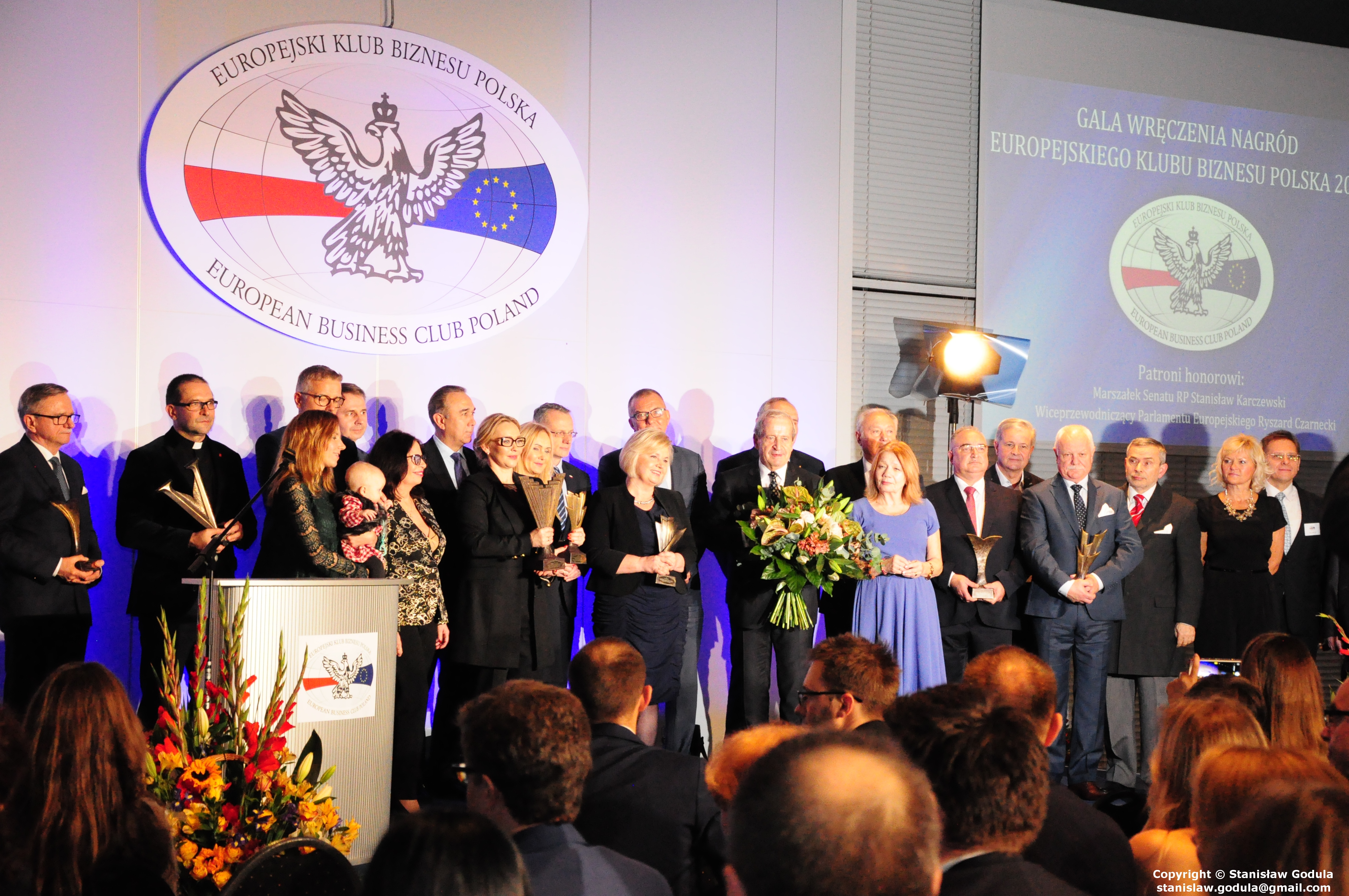