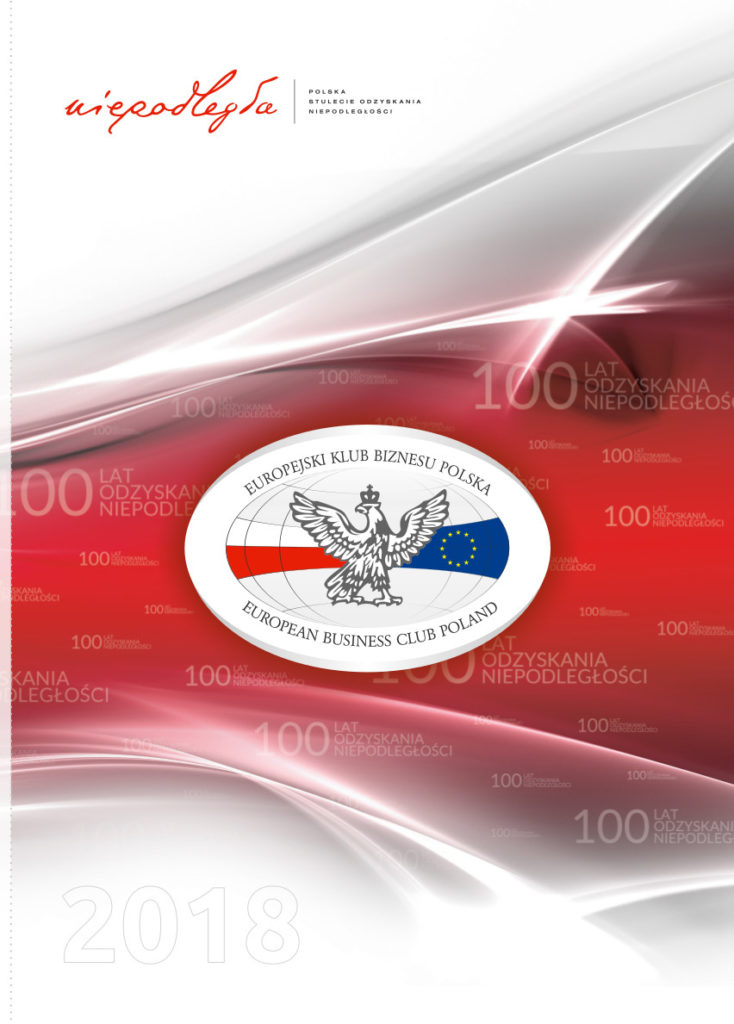 The Royal Castle in Warsaw

On the 12th November 2018 at the Royal Castle in Warsaw, the European Business Club Poland Awards Gala Ceremony was held, on the 100th anniversary of Poland regaining its independence. The Association honoured with the awards people and companies that have contributed significantly to the development of Polish entrepreneurship, economy, science, culture and sport, and that have succeeded on the European and international scale. Complete information about the Award Winners and the awards has been included in the first part of the publication. During the event, the 100th anniversary of restoration of Polish independence was commemorated by awarding companies, whose business activity dates back to that period, and also by a carefully prepared artistic program of a patriotic meaning. The event was distinguished with a visual identification of the Multi-annual Programme „Niepodległa” for the years 2017-2022.

The European Business Club Poland takes a holistic approach to business issues. It understands the meaning of culture, science, sport, media and the whole surroundings to entrepreneurship. Such a comprehensive approach indicates a synergy between business activity and other areas, as a result of which there is a multi-direction development of society, humanitarianism and improvement of life quality, which is crucial for entrepreneurship growth. The Association relies on particular rules and the system of values and ideals. These are: culture, ethos, morality, ethics and social solidarity. The Awards of the European Business Club Poland aim at those values, being their personification.

Guests were welcomed by Janusz Cieślak, the President of the European Business Club Poland, who in his speech presented the issues handled by the Association and he invited the guest for co-operation. Prof. Elżbieta Mączyńska, the Chancellery President, reminded about the rules followed by the Chancellery when choosing the winners, namely an economic success, but also morality, ethics and values extremely important to the Association. A speech was given by Zdzisław Sokal, PhD, representing President of Poland, Adrzej Duda, and Adam Bielan, Vice-Marshal of the Senate, who read a letter from Stanisław Karczewski, the Marshal of the Senate – the Gala Honorary Patron. Prof. Zdzisław Krasnodębski, the Vice-President of the European Parliament and the Gala Honorary Patron, spoke to the guests directly from Brussels via a video conference. A speech was given also by Marcin Ociepa, the Under Secretary of State in the Ministry of Entrepreneurship and Technology. Letters were read at loud, from Marek Kuchciński, the Marshal of the Parliament, Beata Szydło, the Vice-President of the Government and Jerzy Kwieciński, the Minister for Investment and Development. Traditionally, the Gala ceremony was hosted by Przemysław Talkowski, the winner of the award BENE MERITUS 2015 HIGHLY DISTINGUISHED.

The artistic program during the ceremony started with a mini recital on the piano by a young, talented pianist Krzysztof Trzaskowski. The artist played the pieces by Frederic Chopin twice. The official part started with the Polonez dance by the “Warszawianka” Song and Dance Ensemble from the University of Warsaw, awarded with the prize PRO FUTURO 2017 FOR THE FUTURE. The program included also Paintings made with sand by Tatiana Galitsyn, a beautiful, specially made for this occasion show related to the 100th anniversary of the Polish independency reestablishment. The awards ceremony was ended with a wonderful concert of patriotic songs by the world-famous tenor Bogusław Morka, who accompanied by the piano charmed the audience with his beautiful voice, the selected repertoire and an amazing contact with the listeners.

Next, the guests went to Arkada Kubickiego to raise a toast and attended a reception during which they could taste the best Polish fish. The table with the Polish fish, which really interested everyone, was prepared as a promotion under the Operation Program “Fishing and sea” for years 2014 – 2020 executed by the Ministry of Maritime Economy and Inland Waterways Transport. Among this year winners, the stands with products were presented by:

the company MOKATE with a very good coffee, tea and cookies, and the Living Museum of Gingerbread with delicious gingerbread made on the spot. Both stands were really enjoyed by the guests.

The Main Sponsor of the event was Polskie Górnictwo Naftowe i Gazownictwo Spółka Akcyjna. The patron was Deutsche Bank. The partner – the Royal Castle in Warsaw. The sponsor was Port Praski.

The event was supported by Hotel Bristol, where the award winners from Lvov and Bogusław Morka stayed. The guests were protected by the Security Group “WALKRYS SECURITY”, member of the European Business Club Poland.

The guests evaluated very high both the winners, the artistic program and the delicious and varied cuisine. Congratulations and talks lasted endlessly, and the Guests enjoyed the party to the very late night hours.

More information about the Gala and the Winners can be found on: www.ekb.org.pl

We would like to thank Members of the Chancellery for their fruitful work.

We would like to thank the guests for coming and for participating together with the Management Board and Members of the European Business Club Poland Association in this important to entrepreneurs event.

See you at the next Award Gala Ceremony of the European Business Club Poland in 2019!